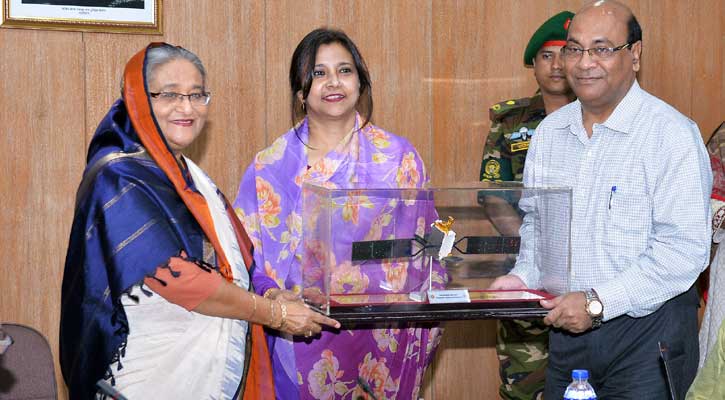 #thenewscompany : Bangladesh will be the 57th country to launch geostationary communication satellite as the country’s first satellite ‘Bangabandhu-I’ is being sent into orbit in the early hour of Friday. It will be launched from the Cape Canaveral launching pad in Florida by Falcon 9 rocket of American firm SpaceX at 4pm local time (BST 2am Friday).

Bangabandhu-I weighing 3.7 tons has already been attached with rocket at the launching pad and all necessary technical preparations have been completed to launch it on 119.1 degree east longitude, State Minister for Information Tarana Halim told #thenewscompany.

On May 4 (Florida local time), a “fire test” of Falcon 9 rocket was conducted successfully as part of the launching process. Earlier, Bangabandhu-I was scheduled to be launched on May 4 from Florida, but it was deferred to May 7 for technical reason. Then the new date was fixed for Friday.

It was supposed to be launched in December last but the date was differed several times due to technical reasons and unfavorable weather.

Bangabandhu-I project was endorsed by the government in May 2015, and it assigned the Thales Alenia by signing a US$ 248-million deal in November the same year. Total cost of the satellite is Taka 2967 crore, of which HSBC has provided Taka 1585 crore as loan.

Though Bangabandhu-I satellite was bought and will be launched from abroad, it will be controlled from Bangladesh. Two ground stations for controlling the satellite have already been built at Joydebpur of Gazipur and Rangamati’s Betbunia.

The Bangabandhu satellite has 40 transponders, which would be able to serve the SAARC countries, Indonesia, and the Philippines, as well as countries such as Turkmenistan, Kyrgyzstan and Tajikistan. One transponder is equivalent to 36 MHz.

Bangladesh will use 20 transponders. The rest 20 will be rented out to other countries especially in some South East Asian countries like Philippines and Indonesia.

Thales Alenia completed the manufacturing works of Bangabandhu-I a few months ago and kept it in a warehouse in Cannes of France. On March 29, the satellite was shitted to Florida.

The satellite has 15 years for mission life span while another 3 years for its design.

Ku-band will cover Bangladesh and its territorial area of the Bay of Bengal, India, Pakistan, Nepal, Bhutan, Sri Lanka, Indonesia and the Philippines.

Once launched, the satellite would save around Taka 110 to Taka 120 crore annually in foreign currency as broadcasting expenditure.