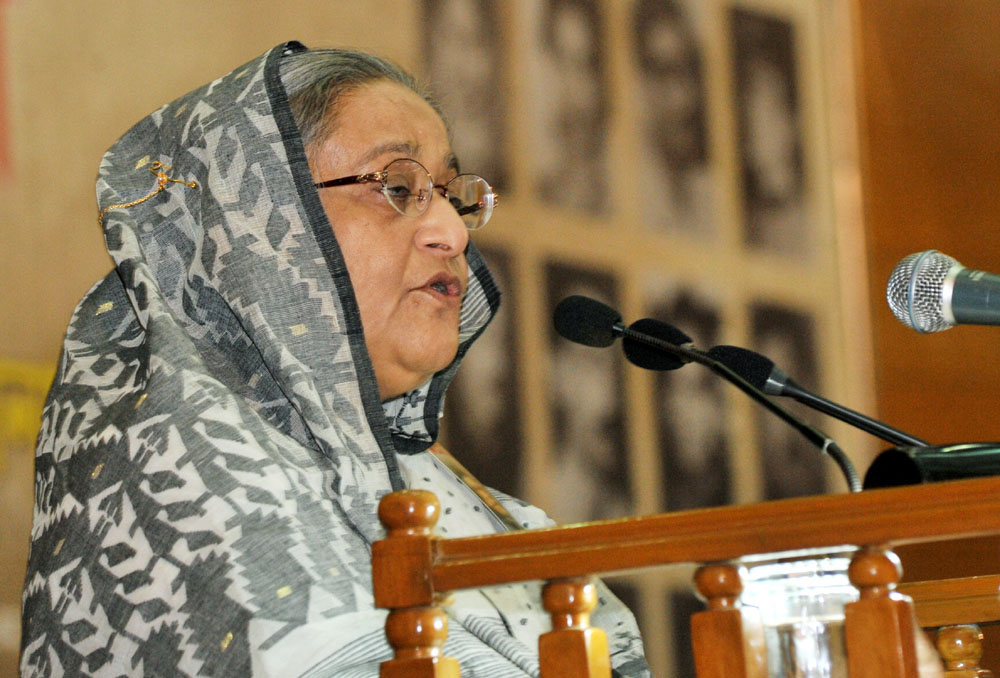 “On the auspicious occasion of the 40th anniversary of Bangladesh’s historic admission to the United Nations, the  government and the people of Bangladesh celebrate with great pride, forty years of Bangladesh’s inalienable  partnership with the apex world body. As our nation reaches this important milestone, I recall with profound veneration paramount contributions of the  greatest Bangalee of all time, Father of the Nation Bangabandhu Sheikh Mujibur Rahman, whose charismatic  statesmanship earned Bangladesh a momentous entry into the UN on September 17, 1974 as its 136th member,” the  Prime Minister said in a message on the eve of the auspicious occasion of the country.

She said Bangladesh’s heroic struggle for nationhood and independence drew inspiration in large measures from the  principles and purposes of the UN Charter. The Prime Minister recalled that the Bangabandhu in his visionary maiden speech at the 29th UNGA (United Nations  General Assembly), pledged on behalf of the nation to uphold without compromise the progressive values of peace,  democracy, secularism, human rights, justice, disarmament and development nationally and globally.

Over the last 40 years, Sheikh Hasina said Bangabandhu’s peace-centric foreign policy pledge for “Friendship to  all and malice towards none” has remained the cardinal guiding principle of Bangladesh’s relentless pursuit of  the agenda for peace, tolerance development and cooperation at the UN. She said, “In 1999 it inspired our government to introduce at the UN a decade on ‘A Culture of peace and non-violence for the children of the world, 2001-2010’. His ideals and my lifelong struggle for democracy and human  rights were presented at the 66th UNGA as the “People’s Empowerment and Development” model and embraced by the  membership as a viable concept for peace, inclusion and development.”

The Prime Minister said the last four decades have witnessed the most vibrant and dynamic partnerships between  Bangladesh and the UN. Bangladesh has earned respect and recognition as a credible player in frontline activities and debates at the UN  including in peacekeeping and peace-building, human rights and tolerance, the MDGs and the post-2015 Sustainable  Development Goals, climate change and disaster management and migration and development. “Our presidency of the 41st session of the general assembly, our two terms at the UN security council and the  human rights council, eight terms at the ECOSOC, our chairmanship of the peace building commission and the  conference on disarmament and re-elections to almost all UN specialised bodies and fora, are all testimony to our  strong credentials as a responsible and contributing member of the UN,” Sheikh Hasina said. The Prime Minister  said, “An unfailing champion of global peace, our nation has contributed nearly 120,000 UN peacekeepers with  record numbers of woman police, in my three tenures. I have personally endeavoured to lead from the front on  issues close to my heart such as, empowering women and girls, countering terrorism and extremism, and voicing the   causes of the least developed and climate vulnerable countries. “It was an honour to receive at the UN accolades for our people such as the MDG Award 2010, the South-South Award  2011 for digital health and 2013 for poverty alleviation. In parallel, the UN too has positioned itself as our  trusted development partner with one of its largest and vibrant countries presence anywhere in the world.”

The Prime Minister said, “As we strive to realise our ‘Vision 2021’ to build a middle-income, knowledge-driven  economy, we count on the UN’s unflinching and assuring hand of support to forge ahead in our shared pursuits  peace and prosperity.”

“On this historic moment of our sojourn with the UN, I wish everyone involved with this commemoration specially  the ministry of foreign affairs and all member of the UN country team. My heartfelt felicitations for forty years  of Bangladesh-UN partnership,” Sheikh Hasina added.