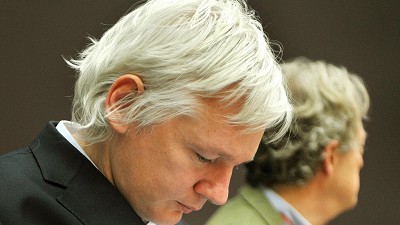 WikiLeaks founder Julian Assange has told smartphone and email users “You’re all screwed”, as he unveiled his latest publications.

The whistle-blowing website has released details of companies it says are selling information obtained by monitoring people’s mobile phones and computers.

According to Mr Assange, more than 150 organisations around the world have the ability to use phones as tracking devices as well as intercept messages and listen to calls. Those companies then sell the wholesale information, often the telecommunications data of “entire populations”.

He told a press conference at City University in London that the publication of the “Spy Files” is a “mass attack on this mass surveillance industry”.

The 40-year-old asked the audience of students and press: “Who here has an iPhone? Who here has a BlackBerry? Who here uses Gmail? Well, you’re all screwed.

“The reality is, intelligence contractors are selling right now to countries across the world mass surveillance systems for all those products.”

Mr Assange said this interception, although lawful, is leading towards a “totalitarian surveillance state”.

WikiLeaks is releasing 287 documents in conjunction with website spyfiles.org.

Mr Assange said the US, UK, Australia, South Africa and Canada are all developing the “spying systems”, and the information is being sold to “dictators and democracies alike”.

He said: “We are releasing over 287 files documenting the reality of the international mass surveillance industry – an industry which now sells equipment to dictators and democracies alike in order to intercept entire populations.”

Bangladesh : Together, let's take next step