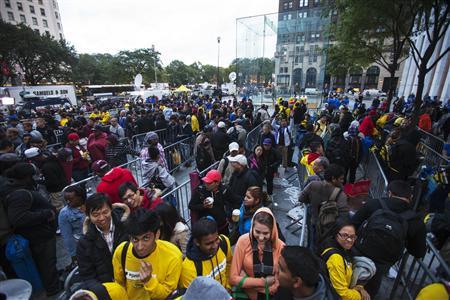 Apple Inc fans queued around city blocks worldwide on Friday to get their hands on the new iPhone 5, pointing to a strong holiday season for the consumer device maker despite grumblings about the mapping app in the new smartphone.

The iPhone 5 — thinner, lighter and with a 4-inch screen — went on sale in stores across the United States, Europe, Asia and Australia, with mobile carriers reporting record demand that looked likely to stretch Apple’s supply capacity.

The iPhone is Apple’s highest-margin product and accounts for half of the company’s annual revenue. Apple shares were up 0.5 percent to $702 in afternoon trading in New York.

JPMorgan estimates the phone could provide a $3.2 billion boost to the U.S. economy in the fourth quarter – a boost almost equal to the whole economy of Fiji.

Apple’s rival and component supplier, Samsung Electronics Co, tried to spoil the party, saying it plans to add the iPhone 5 to its existing patent lawsuits against Apple.

Apple began taking pre-orders for the iPhone 5 last Friday and booked more than 2 million orders in the first 24 hours – double the first-day sales of the previous iPhone, the 4S. Shipping time for online orders is three to four weeks.

As Apple began delivering the new phone, struggling competitor Research in Motion, which makes the BlackBerry, had to admit that it was once again having service problems in Europe, the Middle East and Africa.

The iPhone 5 supports faster 4G mobile networks and also comes with a number of software updates, including Apple’s new in-house maps feature, which is based on Dutch navigation equipment and digital map maker TomTom’s map data.

But not everyone was impressed. Some users criticized the maps feature for a number of geographical errors, missing information, and a lack of features.

And not everyone was thrilled with Apple’s success.

Hundreds of French iPhone fans lining up at Apple’s main store in Paris got an earful from disgruntled store employees and others protesting against Apple policies. 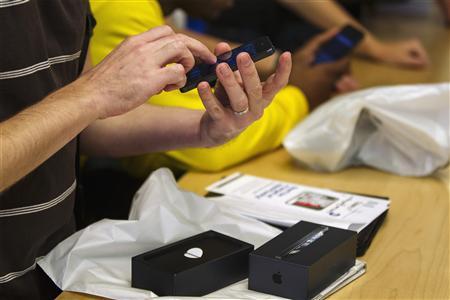 Marching in front of the Paris store were about 20 former staffers of independent Apple distributors that closed after struggling to compete with Apple’s own stores. Joining them were three Apple store employees striking to protest Apple’s refusal to offer staffers meal vouchers and a yearly bonus of an extra month’s pay – perks that are standard for many French workers.

In San Francisco, Apple store worker Cory Moll, who is seeking to start a union and is the founder of the Apple Workers Retail Union initiative, stood outside the main downtown store with a placard showing his support for the French workers and those who assemble Apple products in Asia.

The line of buyers at the store wound around several blocks.

The launch drew crowds of customers at Apple stores worldwide.

Hundreds of people lined up around the block at Apple’s store on New York City’s swanky Fifth Avenue.

Kadijah Perez, 26, a Bronx resident, had not heard about the map issues. She said she wanted to use the phone for navigation, adding, “Hopefully, they’ll just fix it.”

In Annapolis, Maryland, customers settled in lawn chairs waiting for the Apple store in Westfield Annapolis Mall to open. A man walking by quipped: “I’m beginning to believe (Mitt) Romney. The economy is bad. People are starving.”

Waiting in line for anything was a first for Annapolis resident Robert Delarosa, 37, who skipped buying the iPhone 4 due to bad reviews but is now tired of his iPhone 3GS.

“I’m stuck with this old 3GS, a Flintstone phone,” he said.

In London’s central Regent Street, about 1,300 people lined up to buy the iPhone 5, nearly twice as many as showed up for the previous iPhone.

The iPhone 5 “is both the fastest and biggest selling iPhone to date on our network. Pre-order sales are up more than 50 percent compared to the iPhone 4S,” a Vodafone UK spokesman said.

In Germany, 19-year-old musician Okan Yasin had waited since lunchtime on Thursday to be at the front of the queue at the Frankfurt Apple shop. Proudly holding a sign saying “Ich bin Nummer 1” (I am Number 1), he said:

“I just need to have it. I know that the new iPhone from a new features perspective hardly has anything extra to offer. But I just needed to be here. It’s the hype, man!”

In Australia, about 600 people queued around the block at the Apple store in Sydney, the first in the world to hand over an iPhone 5 to a buyer. Customers were limited to buying a maximum of two phones.

“It’s thin and light. I’ve used Samsung before, but the operation, the feeling, of the iPhone is better,” said Wataru Saito, a semiconductor engineer who had been queuing in Tokyo since mid-afternoon on Thursday – with his suitcase, as he had a flight to catch on Friday.

Most of those waiting were fans already hooked on Apple’s earlier iPhones and best-selling iPad tablet computers.

“I feel like if I leave it at home, I go a bit crazy,” said James Vohradsky, a 20-year-old student who queued for 17 hours with his sister. “I can’t do my normal day without it.”

Vohradsky said the iPhone 5’s lack of a mobile payment chip was “a bit of a letdown.” Apple did not embed Near Field Communication (NFC) technology, used to turn cellphones into mobile wallets, into the new smartphone.

There was concern that not enough new phones were available to meet demand.

Softbank and Singtel, Singapore’s biggest mobile phone operator, said demand had exceeded previous offerings from Apple and there was worry the company would not be able to keep up.

Japanese carrier KDDI Corp said it had already run out of the new phone, and Australia’s Telstra Corp Ltd reported online orders sold out in a record 18 hours. Telstra said it was discussing bi-weekly restocking with Apple.

Apple plans to sell the new phone in 100 countries by the end of the year, ramping up competition in a smartphone market that has already reached fever pitch.

Apple is up against phones that run on Google Inc’s Android software, which has become the most-used mobile operating system in the world, while Samsung has taken the lead in smartphone sales.