Forget the stuff about rivals coming together, these guys only have one target in mind 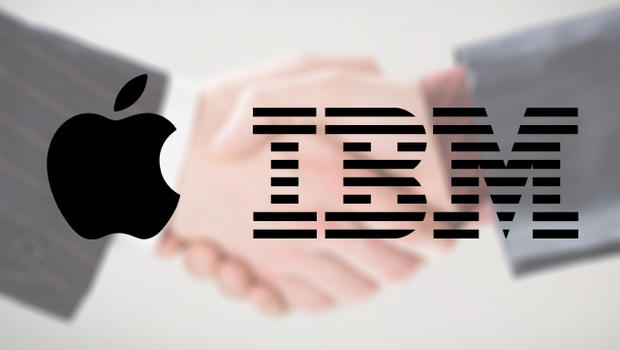 How much competition is there between IBM and Apple? The BBC draws attention to the 1984 ad when IBM was part of the establishment to be destroyed – a lot has happened since then, not least that IBM did a pretty good job of almost destroying itself.

Besides, that was 1984, a time when mobile phones looked like house bricks, when Word Perfect was the height of software and Jimmy Savile was that nice old man warning of stranger danger.

In the modern world, many would think IBM and Apple don’t have much in common. Back in 1984, they would have been competing on PCs, but since the 90s, IBM has been looking to get out of that market. There was a brief period of competition, but the two companies would not have been rivals (and, as Barb Darrow has pointed out, were even partners on Kaleida and Taligent).

So, the news that the two companies are set to combine on mobile devices after striking a deal that will let IBM cloud services be optimised for use on iPhones and iPads, enabling Apple to sell business services to its customers.

It’s the exact opposite for IBM: it has corporate suits hanging on its every word, but an IBM device in a Shoreditch coffee shop would be a social faux pas of the worst order.by

It’s certainly something that makes a lot of sense: Apple makes devices that are loved a whole range of people – from CEOs to hipsters – but it has got little penetration in the enterprise. Yes, your art department might say different but the reality is that Apple scarcely figures as a business powerhouse. It’s the exact opposite for IBM: it has corporate suits hanging on its every word, but an IBM device in a Shoreditch coffee shop would be a social faux pas of the worst order.

If you want to look at the real competitor to IBM and Apple, look across to Redmond. This partnership is a direct challenge to Microsoft. Just this week, in a rather lengthy memo, CEO Satya Nadella laid out his cloud-first policy, where he stated that “we live in a mobile-first and cloud-first world… In this new world, there will soon be more than 3 billion people with Internet-connected devices – from a farmer in a remote part of the world with a smartphone, to a professional power user with multiple devices powered by cloud service-based apps spanning work and life.”

So the IBM-Apple partnership is very timely. As an example, only yesterday, I was talking to Rob Miller, CIO of the shared ICT infrastructure for Kingston and Sutton local authorities. He spoke frankly about the problems of controlling devices and providing what users want. He knows that his users want iPhones but says bluntly “We don’t have the cash to kit them all out” but there’s also an issue with security policies, bringing iPhones into organisations willy-nilly is not good for maintaining the integrity of data.

Kit from corporates is just not as sexy as that from Apple, but Apple is not very good at the boring,non-sexy stuff, you know, business applications, enterprise security, data governance and so on.

And that’s a problem faced not just by local authorities but by a variety of organisations: kit from corporates is just not as sexy as that from Apple but Apple is not very good at the boring,non-sexy stuff, you know, business applications, enterprise security, data governance and so on. The stuff that people need to do their jobs. IBM can do that with its eyes shut – the B could almost stand for boring – which is why this partnership is just such a good fit.

Commentators were divided about whether this was a win for Apple or IBM. In her piece, for example, Barb Darrow says Apple is the beneficiary, while Seeking Alpha scored it as a win for IBM. It should be noted that the markets definitely liked the news, as the stock prices for both firms rose after the announcement.

So far, so good: the challenge now is to make the deal work – announcing a partnership is one thing, delivering the apps is another. Looks like there a going to be a few iOS developers run off their feet in the coming months.

Bangladesh : Together, let's take next step

Lost of another son of the soil…..