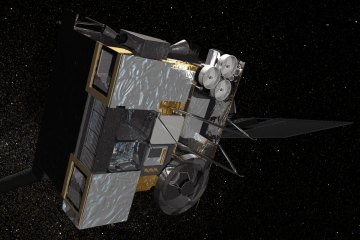 Things got dicey in the command centers of the GOES-East weather satellite on September 23. Mission controllers with NASA and the National Oceanic and Atmospheric Administration (NOAA) in southern Maryland, watched in alarm as the images being beamed down from 22,000 mi. (35,000 km) up grew spotty and the stream of temperature and moisture readings became sputtery. GOES-East (for Geostationary Operational Environmental Satellite), and its companion ship, GOES-West, hover over the two halves of the U.S. in orbits that match the rotation of the planet, keeping a fixed eye on events below. But GOES-East was now winking out — in the final month of a hurricane season that would give birth to an infant storm later to be known as Sandy.

Happily for the vulnerable northeast, NASA and NOAA had a back-up GOES parked in orbit nearby, and swung it into position while the engineers troubleshot the problems with the main ship. But that understudy was the last line of defense. If the back-up went offline as well, America’s entire weather forecasting web would have been struck partly blind. And that near-miss, a growing number of worried scientists believe, was an early glimpse of what could be our  future.

On any given day, from 20 to 30 American weather satellites — depending how you count those dedicated solely to forecasting and those that also engage in basic environmental research — peer down on the planet. Plenty of other countries — China, India, Brazil, Japan, the members of the European Union — have similar assets aloft. For the U.S., however, it is the GOES ships, plus a north-south polar-orbiting satellite, that do the overwhelming share of the work. Now, thanks to budget cuts, short-sighted federal planning and the natural life-and-death cycle of satellites, they’re all at risk — and so are we. That’s the message both from the government’s National Research Council — which, in May, released a comprehensive study on the precarious state of America weather fleet — and from the scientists and commentators who make it their business to understand this stuff.

“There is a coming decline,” says J. Marshall Shepherd, director of the atmospheric sciences program at the University of Georgia, president-elect of the American Meteorological Society and a former NASA meteorologist. “Gaps are opening in both our operational and research satellites. And if one of them goes out, it’s not like simply replacing a burned-out light bulb. These things take years to build and launch.”

It’s the money component — no surprise — that’s at the root of the current problem. Satellites are cheap by spacecraft standards — but that standard means at least a few hundred millions dollars apiece. Over the course of any one satellite’s lifespan, the overall price tag can rise to $1 billion. NASA’s entire annual budget for Earth sciences was $2 billion in 2002, but has fallen to less than $1.5 billion in the decade since. And while there are a collective 90 Earth-sensing instruments carried aboard the entirety of NASA’s weather-forecasting fleet, that number could fall to as few as 20 by 2020.

“The projected loss of observing capability will have profound consequences on science and society,” said the University of Washington’s Dennis Hartmann, the chairman of the NRC committee, in a statement that accompanied the study’s release. “Our ability to understand changes in Earth’s climate and life support systems will also degrade.”

The penny-pinching is hard to reckon from a cost-effectiveness standpoint. Hurricane Katrina cost the government and private insurers about $110 billion dollars. Hurricane Andrew, in 1992, carried a price tag of $21 billion. These are by no means annual events — but they are most assuredly annual risks. And factoring the intermittent disasters together with the more-common calm years, about $5 in costs are saved for every $1 in space infrastructure spent. Those savings compound as each storm improves our ability to predict the next one.

“Weather satellites aren’t just about forecasting,” says Marshall, “they also feed data into our larger forecasting models. Those models picked up on what Sandy was going to do 8 or 9 days in advance.” According to Heidi Cullen, climatologist with the American Meteorological Society, our ability to predict the path of a hurricane five days in advance today is actually better than our three-day forecasts were a decade ago.

While the need to fund, build and replace these assets is clearly a known known, there are known unknowns too. On two occasions in the past three years, weather satellites being launched into orbit simply crashed into the ocean instead — always a risk when you light the fuse on any rocket — burning up $700 million in hardware in the process. Even when a satellite does get safely into space, there’s no telling how long it will stay in operation.  ”One of the missions I worked on when I was with NASA was supposed to last two or three years,” says Marshall. “We launched it in 1998 and it’s still going strong.”

That, however, is the exception. The polar satellite the U.S. relies on so heavily (known as Suomi, after the late Verner Suomi, the meteorologist considered the father of satellite forecasting) has perhaps three years of life left to it, and its replacements — the Joint Polar Satellite System (JPSS) — are not likely to be launched until 2017 and 2022. Suomi could over-perform and the JPSS satellites could come along earlier than expected, but experts still anticipate a gap of perhaps two years, from 2016 to 2018, in which polar observations will be incomplete at best.

Meantime, as the U.S. fights just to keep the lights on in its weather satellite programs, we are increasingly falling behind the technology of the rest of the world. European systems use what is called four-dimensional forecasting — a system that includes next-generation data-updating and real-time projections. The U.S. is still in the 3D era — which means we’re very good at collecting information, but less good at actively refreshing it and making predictions from it. In a perfect funding system — or even a less myopic one — we’d have plenty of money to speed the launch of the JPSS satellites and ensure the future of the now-in-development replacements for the GOES fleet. Neither of those programs, however, is currently secure. Weather forecasting is not sexy — but when it comes to predicting and mitigating Sandy-scale emergencies, not-sexy is very good. And unpreparedness is very, very bad.