All Rana Plaza victims to be compensated within weeks: ILO 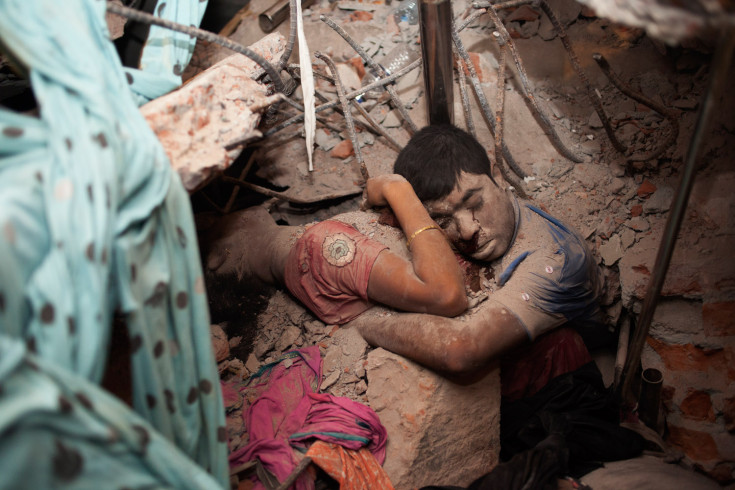 Garment Workers in Deathtrap_ Taslima Akhter_ Nobody knows who are they, what is the relation between them but the crude reality make them closer and may be they are trying to save each other and the last moment of their life from the death trap of Savar Rana Plaza_. Embrace in Death. Near about 438 workers died as building Collapse at Savar Rana Plaza. Most of them are women. Savar Dhaka, Bangladesh, 24th April 2013

e-News® | The NEWS Company…DHAKA, June 19, 2015 : A fund set up to compensate the victims of the Rana plaza factory collapse has finally reached its 30-million target, the UN’s international labor organization (ILO) said this week. With all the funding now secured, the last families still awaiting a payout will receive their money “In The Coming Weeks”, said the ILO, which chairs the Rana Plaza coordination committee.

The committee, which was established in 2013 and represents all industry stakeholders, had estimated it would need 30 million (26.5 million euros) to fully and fairly compensate the families of the over 1,100 garment workers who died and some 1,500 others who were injured in the country’s worst ever industrial accident. By April 24, on the second anniversary of the disaster, the committee had raised 27 million and was able to pay compensation to 70 percent of the more than 2,800 claimants, the ILO said in a statement.

“Further donations, including one significant sum pledged late last week meant that 30m had now been reached and all payments can be made,” it added. The development was welcomed by ILO director-general Guy Ryder. “This is a milestone but we still have important business to deal with,” he was quoted as saying in the statement. “We must now work together to ensure that accidents can be prevented in future, and that a robust national employment injury insurance scheme is established so that victims of any future accidents will be swiftly and justly compensated and cared for.”

A host of western retailers had clothing made at Rana plaza, including Italy’s benetton, Spain’s mango and the British low-cost chain Primark. all three were among a number of international brands that contributed to the compensation fund.