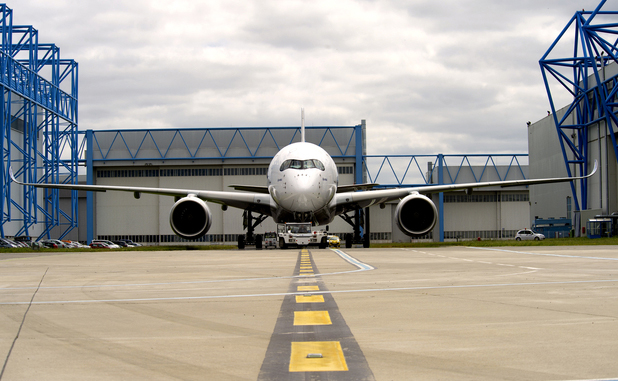 Now that Airbus has passed the first-flight milestone on its A350 program, Airbus flight-test center head Fernando Alonso says one of his challenges is “not to be overconfident. He described last week’s first flight as being “totally uneventful” and “a little bit boring,” when he presented the first details on the opening day of the Paris Air Show here.

Alonso was one of a team of six on board of MSN001, which took off for the first time on Friday at 10 a.m. for a flight lasting four hours and five minutes. Peter Chandler and Guy Magrins were the experimental test pilots in the left- and right-hand side seats in the cockpit. The maiden voyage actually took five minutes longer than planned, but that was because French air traffic control sent the aircraft into a holding pattern before it was handed over from the Bordeaux to the Toulouse-Blagnac ATC center.

The aircraft initially climbed to 10,000 ft. in eight minutes and remained in the 10,000-15,000 ft. range for two hours and 48 minutes. During that time, the crew tested various configurations of the aircraft initially in the most basic version of direct control law, but eventually switched to normal law.

“We went through sweeps to see how the structure reacts before we went to normal law,” Alonso said. “It is time-consuming, but straightforward.”

Similar tests were performed in normal law after around 90 minutes with data being checked against calculated models through telemetry. “Two hours after take-off we were in normal law with all configurations cleared”. The only glitch during the first flight involved pressurization, but it only happened because of a programming mistake. Cabin pressure started to go down because the computer was assuming the aircraft was landing after 45 minutes as initially programmed. “We then entered New York as a destination and the pressure came back up again,” Alonso said.

The crew took the aircraft to 25,000 ft. in normal law and cleared several configurations in normal and direct law before engaging the autopilot for the last five minutes of the cruise flight. The descent was also initiated in autopilot and autothrust mode and the crew tested buffeting effects.

Back at 10,000 ft., an approach was simulated in full landing configuration, including a flare. Chandler and Magrin also went through a go-around procedure and decelerated down to a stall warning. While the two had built in some margin on take-off speed, they took out that margin on landing and used brakes, reversers and spoilers as they would in routine operations. According to Alonso, performance and fuel-burn tests only start in earnest in the coming weeks; first-flight data is not meaningful because of all the configuration changes and the protracted flight time with the landing gear extended.

The aircraft went through detailed maintenance checks during the weekend and Airbus is not saying yet when it will fly again. The aircraft needs to clear the full flight envelope on its second flight, before it could appear at the Paris air show towards the end of the week during what would be its third flight.