BREAKING NEWS
Home Business A Year After the Deadly Bangladesh Factory Disaster, How Much Has Changed?

A Year After the Deadly Bangladesh Factory Disaster, How Much Has Changed? 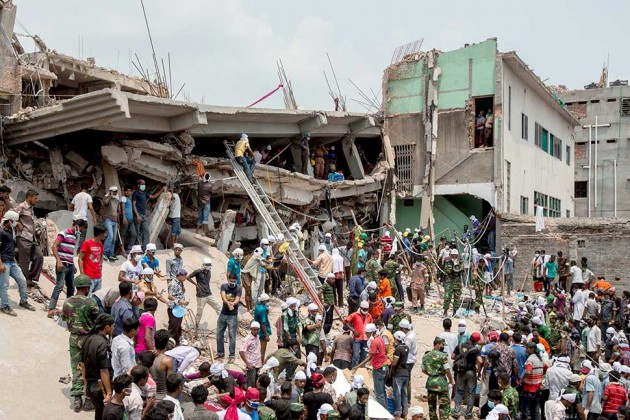 e-News® | The NEWS Company… :  One year after a deadly factory disaster cost Bangladesh certain U.S. trade privileges, its government and business leaders are pushing to get them back. But the officials’ behavior prompts questions about how much has really changed in Bangladesh.

Last month, a delegation including Bangladesh Commerce Minister Tofail Ahmed and leaders of the Bangladesh Garment Manufacturers and Exporters Association (BGMEA) came to Washington to detail the progress they had made on worker safety in Bangladesh, the second-largest garment exporter in the world. The Bangladeshi government and the BGMEA argue it’s time for the White House to restore the Generalized System of Preferences (GSP) tariff breaks it suspended following the April 2013 Rana Plaza factory building collapse, in which more than 1,100 people died. The Bangladeshi delegation included representatives of the Alliance for Bangladesh Worker Safety, a business-backed group whose board is chaired by former Democratic Representative Ellen O’Kane Tauscher and includes officials from Gap, Wal-Mart, and Target as well as the BGMEA (the alliance itself says it has no stance on GSP, but took part in the delegation in order to promote safety efforts; Tauscher condemned comments made by Ahmed and the BGMEA after they returned to Bangladesh).

The economic impact of those lost GSP trade privileges is limited—they had only covered about $35 million of exports to the U.S., and didn’t apply to the roughly $4.5 billion in goods the U.S. imports annually from the country’s garment industry. But the GSP privileges carry symbolic weight in the Bangladeshi government’s efforts to stave off more consequential trade penalties from the European Union, overhaul its reputation for allowing factory deathtraps, and eventually secure more favorable trade treatment from the U.S.

Pro-labor advocates have blamed disasters such as the Rana Plaza collapse—and a deadly fire at the Tazreen factory five months earlier—not just on a lack of regulations, but on a pattern of alleged violent suppression of workers’ organizing efforts. So when they met with the Bangladeshi delegation, members of Congress say they expressed concern over allegations they’d received about the recent repression of union activists. They say the Bangladeshis asked for more information and pledged to investigate.

Commerce Minister Ahmed and BGMEA President Mohammad Atiqul Islam went back to Bangladesh and quickly made headlines—not about the need to crack down on the alleged intimidation the congressmen confronted them with, but about the need to keep union leaders from talking to U.S. congressmen. “Conspiracies are afoot to damage the RMG [Ready-Made Garments] industry,” Minister Ahmed told reporters on June 22. He said he’d learned on his trip that “Several of our labor leaders have secretly written to” the Americans and that “We should contemplate steps against them.”

That spurred a response from U.S. House Democrats who’d talked with the Bangladeshi delegation, including the ranking members of the Education & the Workforce, Ways & Means, and Foreign Relations committees. In a letter (PDF) to Bangladesh’s prime minister, they expressed “shock” at media accounts “reporting that your Commerce Minister and the BGMEA President, rather than calling for the authorities to investigate intimidation, engaged in intimidation of labor activists themselves.”

But Ahmed didn’t back down, instead telling the Bangladeshi press that the House Democrats’ letter “is indecent and political” given the “satisfactory” progress in Bangladesh’s apparel industry. (Asked about that response, Representative George Miller said in an e-mailed statement, “The Bangladeshi government must support workers who come to them for help—not subject them to further harm.” The Bangladeshi Commerce Minister’s office and the BGMEA did not provide comment in response to inquiries.) On July 11, a week after the Democratic congressmen sent their letter, BGMEA President Atiqul Islam issued an ominous-sounding statement: “The leaders of RMG workers cannot pass any secret information abroad without the knowledge of the authorities concerned or law-enforcement agencies in this sovereign state. We will never tolerate such anti-state activities.” Those comments so far haven’t been rebuffed by the government of Bangladesh.

“That level of people, when they shout our name [in] that way, these sorts of security threats increase,” says Kalpona Akter, one of the labor leaders called out by name by Minister Ahmed in his comments about union conspiracies. Akter, who directs the Bangladesh Center for Worker Solidarity, was arrested along with a colleague in 2010 and jailed on allegations of inciting riots; her co-worker Aminul Islam was found dead and apparently tortured in 2012. In the year since the Rana Plaza devastation, pro-labor advocates have noted signs of progress—including a surge in the registration of newly recognized unions and a 77 percent rise in the minimum wage—but say it’s come with a backlash. “What we’ve seen is a very serious increase in illegal and sometimes violent attacks,” says Scott Nova, who directs the D.C.-based Workers Rights Consortium. “Including cases in which union organizers have been physically assaulted, had guns put to their heads, had limbs broken, ended up in the hospital. … And the government’s response to this has been to allow it.”

NGOs aren’t the only ones concerned. On July 2, U.S. Trade Representative Michael Froman announced that Bangladesh hadn’t made enough progress to get its GSP benefits back. In a statement, Froman cited concerns including “continuing reports of harassment of and violence against labor activists who are attempting to exercise their rights.”

Threatening the Bangladeshi trade unions is “not a very smart way to get GSP benefits back,” says Nova, but “what’s clear is that you have an orchestrated effort by the government and BGMEA to intimidate union leaders in Bangladesh so that they do not in the future report publicly when their members and their organizers are violently attacked.”

T-Mobile to Expand Value Plans and Let You Upgrade Early

Apple's iPhone needs to dazzle as market gets crowded