BREAKING NEWS
Home Business 3G licences will be given through auction 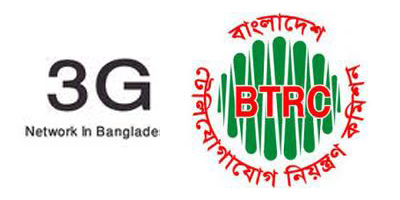 The meeting held at the Prime Minister’s Office also decided to give 3G (third generation) technology licences through auction. However, Bangladesh Telecommunication Regulatory Commission and the telecom ministry will calculate and disclose the spectrum allocation charges for the operators by August 15.

Telecom Secretary Sunil Kanti Bose said the operators will have to pay Tk 150 crore for per megahertz of spectrum and the amount will be finalised on the basis of their market share.

Now an operator with a big subscriber base will pay higher than a low-subscriber operator, he said. “Otherwise some of the operators will be affected and won’t survive.”

Now Grameenphone will have to pay higher than its nearest peers; Banglalink and Robi will be in the middle, while Citycell will pay less, on the basis of the calculation — Tk 150 crore/ per megahertz of spectrum multiplied by the total amount of spectrum and the market competition factor.

Last year the BTRC proposed a ‘utilisation factor’ (UF) to determine the spectrum assignment fees of the operators. As the UF causes different rates for different operators, a high-profile meeting on July 10 suggested abolishing the UF.

However, this time the UF comes as the ‘market competition factor’, according to telecom ministry officials.

The meeting also supported the BTRC proposal of 5.5 percent revenue sharing for the mobile operators, instead of 5 percent proposed by the ministry.

However, now the operators will pay 1 percent of their revenue to Social Obligation Fund, a new idea to help implement the government’s vision for a ‘digital Bangladesh’.

The meeting also decided that the licence renewal process has to be complete by November 10 this year, and the upfront spectrum charges have to be paid in four instalments within two years.

The meeting suggested opening voice over internet protocol (VoIP) for all who are interested.

Google's digital glasses move out of lab and closer to reality