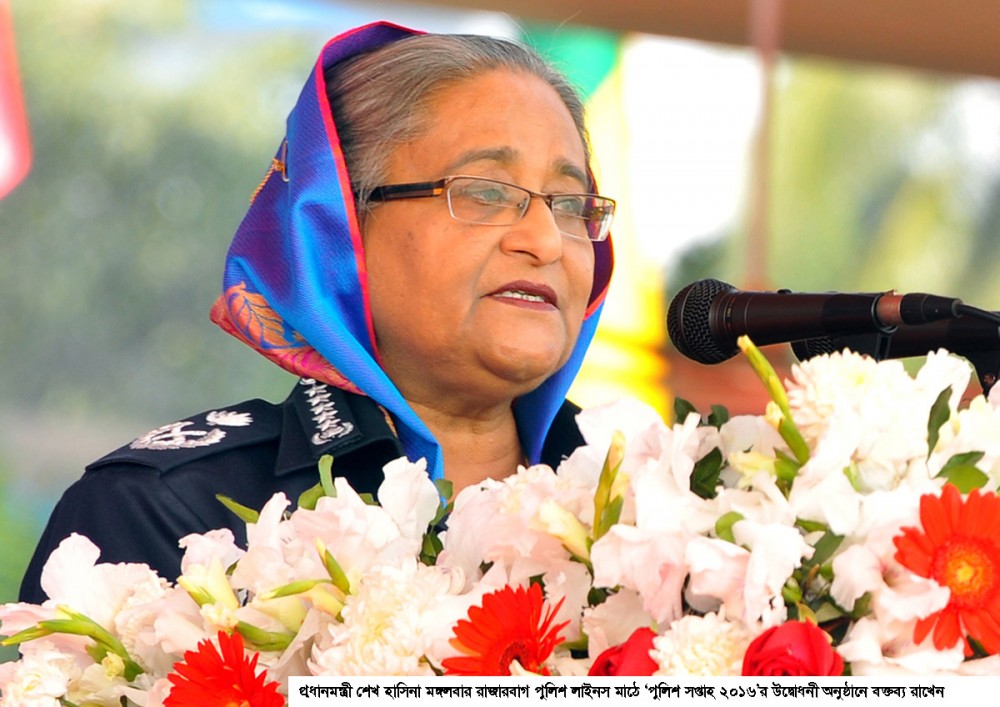 e-News® | The NEWS Company…DHAKA, Jan 27, 2016 : Prime Minister Sheikh Hasina today said the work on formation of a “specialized unit” in Bangladesh Police is underway to combat terrorism and militancy, while the government has decided to create 50,000 new posts in the force.
“A process is underway to constitute a ‘specialized unit’ to increase the capability of Bangladesh Police to combat terrorism and militancy,” she said while inaugurating the Police Week-2016 at Rajarbagh Police Lines here this morning.
Reiterating the government’s firm commitment to further strengthen the police force, the Premier said her administration wants to raise the manpower of the force so that it remains always vigil to face any situation.
“We want to impart training to the police members in the way they take steps in any situation,” she said.
The Prime Minister said terrorism is going on across the globe. “But by the grace of Allah, terrorism and militancy could not raise their head in Bangladesh as the law enforcement agencies, particularly police, remain alert to this end,” she said, thanking the law enforcement agencies. Elaborating her government’s various steps for the development and welfare of the police force, Sheikh Hasina said the number of current manpower of Bangladesh Police is over 1.50 lakh thanks to timely steps of her administration. 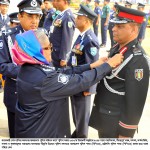 “We created 32,031 posts in police organogram including 739 cadre posts over the last seven years. Despite that the number of manpower in the force is not adequate in ratio of the population….considering this, we have decided to create 50,000 more posts,” she said. The Prime Minister said recruitment of police personnel in 13,558 posts including 277 cadre posts has already been completed. “The process for recruiting other manpower would be completed soon,” she said. Alongside recruitment of more manpower, she said, supply of necessary transports and other equipment on priority basis is under active consideration by the government.
Sheikh Hasina said her government has constituted Industrial Police, the Police Bureau of Investigation (PBI), Tourist Police, River Police, the Special Security and Protection Battalion. “The people started getting results of these initiatives,” she said.
The Prime Minister said her government reintroduced the “IGP Rank Badge” given by the Father of the Nation, while sub-inspectors/sergeant posts have been upgraded to class two and inspector post to class one. “We are now providing 100 percent ration for the police members,” she said. Earlier, the Premier reviewed a spectacular parade of different contingents of Bangladesh Police riding on an open jeep. She also took salute.
On her arrival at the scene, the Prime Minister was received by Home Minister Asaduzzaman Khan, Inspector General of Police (IGP) AKM Shahidul Haque and Additional IGP and Parade Committee President Mokhlesur Rahman. At the function, Sheikh Hasina handed over Bangladesh Police Medal (BPM) and President Police Medal (PPM) to 102 police members in four categories for their bravery and heroism in their services in last one year. Of the policemen, 19 got the BPM award and 40 the PPM award, while 23 received BPM-Service award and 40 others PPM-service award.

Office App Now Free for Home Use on iPhone and Android

Putin to put Russian government on Linux by 2015