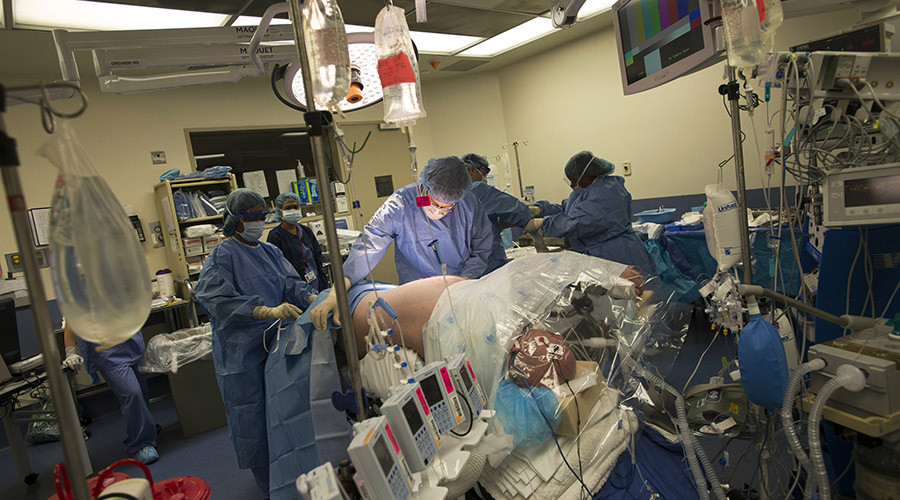 e-News® | The NEWS Company…Baltimore, Dec 08, 2015 : Doctors in Baltimore, Maryland will perform up to 60 penis transplants on injured veterans who lost their genitals in Iraq and Afghanistan. It will be the first time the procedure is performed in the United States. Johns Hopkins University has given three doctors permission to perform the experimental surgery within a year, the New York Times reported. The university, which runs one of the premier medical schools in the US, will monitor the results, then decide whether to make the operation a standard treatment.

Nearly 1,400 military servicemen sustained injuries to the genitals between 2011 and 2013 in Iraq and Afghanistan alone, according to the Department of Defense Trauma Registry. The vast majority of the 1,367 injured troops was under 35 and had lost all or part of their penises or testicles on account of improvised explosive devices (IEDs). Approximately 7 percent of male military personnel under the age of 40 sustained genital injuries during their military service, a 2014 report in the Journal of Sexual Medicine found. Of the 16,323 trauma admissions between 2001 and 2008, 5 percent involved genitourinary injuries ‒ trauma including the genitals, bladder, urinary tract and kidneys. The majority of those injuries were to the scrotum (29 percent), followed by the kidney, (22.9 percent), bladder (21.3 percent), penis (14.2 percent), testicle (9.1 percent), ureter (2.7percent), and urethra (0.8 percent), according to a 2010 report in the Journal of Trauma.

“These genitourinary injuries are not things we hear about or read about very often,” Dr. W. P. Andrew Lee, the chairman of plastic and reconstructive surgery at Johns Hopkins, told the New York Times. “I think one would agree it is as devastating as anything that our wounded warriors suffer, for a young man to come home in his early 20s with the pelvic area completely destroyed.”

When men are injured in combat, the first thing they ask about after surgery is their genitals, doctors told the NY Times. “Our young male patients would rather lose both legs and an arm than have a urogenital injury,” Scott E. Skiles, the polytrauma social work supervisor at the Veterans Affairs Palo Alto Health Care System, said.

Army Sergeant First Class Aaron Causey knows just how traumatic it is to lose your “manhood.” Thanks to an IED in Afghanistan, he lost both legs, one testicle and part of the other in 2011. To him, the testicular damage was the worst of his injuries.

“I don’t care who you are ‒ military, civilian, anything ‒ you have an injury like this, it’s more than just a physical injury,” Causey told the NY Times. Johns Hopkins has restricted the transplant surgery to those, like Causey, who suffered genitourinary injuries in combat.

“Once this becomes public and there’s some sense that this is successful and a good therapy, there will be all sorts of questions about whether you will do it for gender reassignment,” Dr. Jeffrey Kahn, a bioethicist at the Baltimore school, told the NY Times. “What do you say to the donor? A 23-year-old wounded in the line of duty has a very different sound than somebody who is seeking gender reassignment.” After the transplant is completed, the penis will begin working in a matter of months, allowing the recipient to develop urinary function, sensation and even the ability to have sex.

“Some hope to father children,” Dr. Lee said. “I think that is a realistic goal.” In fact, the 21-year-old recipient of the first successful penile transplant, performed in South Africa last December, was able to impregnate his partner just five weeks later. Doctors in South Africa are hoping to perfect the procedure to help the more than 250 young South Africans who are annually forced to undergo penile amputation due to complications following traditional circumcision ceremonies, mostly performed by Xhosa tribal populations away from urban areas.

Prior to that surgery, doctors had to fashion a penis out of the donor’s abdominal skin so that he could be buried with a penis-shaped organ. Johns Hopkins will ask permission to specifically use the penis from the families of donors, just as doctors would for hands and face transplants, Kahn said.

If the transplant recipients do impregnate their partners, it will be with their own ‒ not the donors’ ‒ sperm, as the testes will not be a part of the procedure, the NY Times reported. Those men who have completely lost their testicles and receive transplants will not be able to have biological children.

Chinese doctors “regretfully” reversed a penis transplant after just two weeks in 2006 after the 44 year-old patient suffered “severe psychological problems” following the surgery, with neither the man nor his wife accepting the new appendage. That surgery was poorly documented, but photographs of that transplant had patches of dead and peeling skin, possibly from inadequate blood flow, the Johns Hopkins doctors told the NY Times.
The American transplant team believes that the men they will work with will take to their new organs the same way hand transplant recipients do, because hands and penises are both external and distinctive from those organs on other people.

“I can tell you from all the patients… every single one, after surgery, look at the graft, try to move it and they immediately call it ‘my hand’,” Dr. Gerald Brandacher, the scientific director of the reconstructive transplantation program at Johns Hopkins, told the NY Times. “They immediately incorporate it as part of their body. I would assume, extrapolating, that this is going to be the same for this kind of transplant.”

The first operation should last about 12 hours, with Johns Hopkins covering the estimated cost of $200,000 to $400,000, similar to that of a hand transplant, Lee said. The surgery requires connecting two to six nerves as well as six or seven veins and arteries. The recipients will need to take anti-rejection drugs for the rest of their lives, as they would with any other organ transplant.