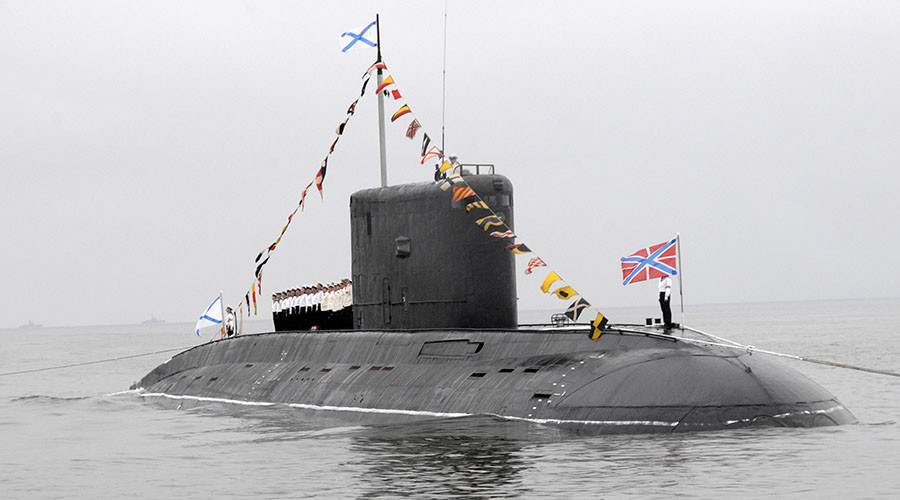 The crew of a Russian Kilo-class diesel submarine line up on its deck during a naval parade rehearsal at the harbour of Russia’s far eastern city of Vladivostok, July 23, 2010. Russia will mark its Navy Day on Sunday. REUTERS/Yuri Maltsev (RUSSIA – Tags: MILITARY ANNIVERSARY) – RTR2GNLU#thenewscompany

e-News® | The NEWS Company…Dubai, Dec 08, 2015 : An advanced Kilo-class submarine has appeared near the Syrian coast, according to a source within the Russian MoD. The Rostov-on-Don sub is equipped with modern Russian Kalibr cruise missiles. In mid-November, there were reports of the same submarine striking targets in the Islamic State stronghold of Raqqa. These were neither confirmed nor denied by the MoD. Russian warships in the Caspian Sea hit Islamic State (IS, formerly ISIS/ISIL) targets in Syria with modern Kalibr cruise missiles in early October.

Known as ‘Improved Kilo’ under a NATO code name, the Rostov-on-Don (B-237) is the first trade-off model of the third generation submarines of the Varshavyanka class (Project 636) subs. The diesel-electric stealth sub is believed to be the quietest in the world. It also possesses an extended combat range and its relatively small size helps it maneuver in shallow waters. The sub is armed with 533mm torpedoes and reportedly Kalibr-PL (submarine modification) water-to-surface cruise missiles. The sub weighs 4,000 tons, reaches underwater speeds of 20 knots (37kmp/h) and can dive to a depth of 300 meters. It has a 52-man crew and can spend 45 days at sea before needing to go to port. NATO has called this type of submarine a “black hole” for its ability to remain undetected.

A diamond bigger than Earth?

Joy for taking high-speed internet service to all

Google admits it did not delete Street View data