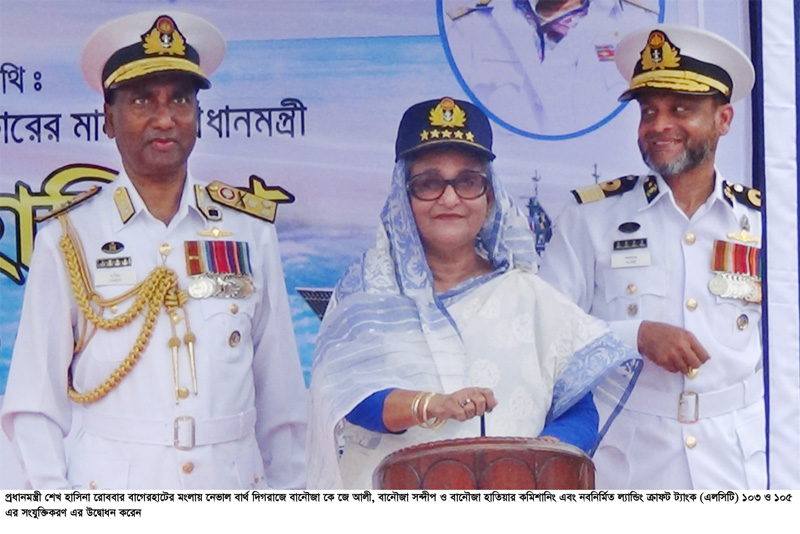 e-News® | The NEWS Company…BAGERHAT, Sept 6, 2015 : Vowing to build Bangladesh Navy as a most modern and strong force to safeguard the country’s independence and sovereignty, Prime Minister Sheikh Hasina today said two submarines would join the navy fleet in the middle of 2016.

“A process for induction of two submarines in the navy has already been finalized and the submarines would join the navy fleet in the middle of 2016 Insha Allah,” she said. Sheikh Hasina also said construction of a base and other infrastructures for the submarines is under process, while a priority is being given to launch full-fledged flotilla activities in Khulna river zone. The Prime Minister said this while addressing a function marking the commissioning of one oil fleet tanker and two landing craft utility (LCU) as well as induction of two landing craft tankers in Bangladesh Navy at Digraj Naval Jetty in Mongla here.

Through the function Khanjahan Ali, the first oil fleet tanker made in the country, and LCU ships — Sandwip and Hatiya — and two landing craft tankers — LCT-103 and LCT-105 — were commissioned and inducted respectively in the navy. On her arrival at the Mongla Naval Base, the Prime Minister was received by Chief of Naval Staff Vice-Admiral Farid Habib and the regional commander of Khulna River Zone. At that time, a smartly-turned out contingent of Bangladesh Navy gave a guard of honour to the Prime Minister. She inspected the guard and took salute.

Later, Sheikh Hasina handed over the “commissioning and induction forman” formally and unveiled the name plaques of the ships. During the time, the ships bell was played and flag was hoisted as per the tradition of Bangladesh Navy. The Prime Minister also called upon the naval officers and sailors to always uphold the dignity of Bangladesh Navy in the international arena by maintaining chain of command and professional excellence.

“I hope that you would always uphold the dignity of Bangladesh Navy in the global arena through professional excellence by maintaining higher work efficiency, discipline and chain of command,” she said. She said it’s an expectation of all that our naval force would be able to a play a crucial role not only in the country, also at any place of the world in establishing global peace. Paying profound respect to Father of the Nation Bangabandhu Sheikh Mujibur Rahman, Sheikh Hasina said immediately after independence, the great leader took strong measures to establish a strong naval force to protect the country’s maritime boundary.

Due to geographical position and strategic reasons, she said, the role of Bangladesh Navy in protecting Bangladesh’s maritime boundary and its resources is undeniable. The Prime Minister said before the independence, Bangabandhu realized the truth that there is no alternative to a strong and modern navy for safeguarding the maritime boundary and sea resources. “That’s why, in the historic six-point movement, he raised a demand for establishing Pakistan Navy headquarters in East Pakistan,” Sheikh Hasina noted.

She said though Bangladesh Navy had started its journey with only two patrol craft, that small navy is now going to be transformed into a dignified three-dimensional force thanks to materializing the farsighted thought of Bangabandhu. The Prime Minister also mentioned that Bangladesh Navy got world recognition for its various contribution to the international arena, including the UN Peacekeeping Mission.

Sheikh Hasina said the advancement of Bangladesh Navy has been intensified with the formation of the Awami League government in 1996. At that time, she said, the most modern missile frigate BNS Bangabandhu, large patrol craft Madhumoti, patrol craft – Barkat, Titas and Kushiara and tanker Kushiara were commissioned in the navy. “Besides, handing over the sick Khulna Shipyard to the navy was an epoch-making step of our government,” she said. While talking about her present government’s initiatives for the development of Bangladesh Navy, the Prime Minister said her administration has adopted short and long-term plans to build the navy as an effective force. “The plans would be implemented by 2030 Insha Allah,” she said.

Under the plans, she said, most modern survey ship BNS Onusandhan, maritime helicopter and maritime patrol aircraft, two missile frigates, a US-made frigate, two missile corvettes and five patrol craft made by Khulna Shipyard were inducted in the navy. Sheikh Hasina said another US-made frigate BNS Samudra Ovijan and two modern corvettes BNS Pratya and BNS Swadhinata that are being built in China would be added to the navy fleet this year.

She said a special force named “Special Warfare Diving and Savage (SWDS)” has been added to the navy for unconventional warfare during the tenure of the present government. Moreover, she said, setting up a surveillance station and other relevant infrastructures for increasing round-the-clock surveillance in the coastal region is under special consideration. The Prime Minister said her government is pledge-bound to build Bangladesh Navy as a well-equipped force to protect resources by curbing smuggling of arms and other goods and keep open the sea routes.

Pointing out the induction of the fleet tanker, made in the country’s shipyard for the first time with local and foreign technologies, in the navy, Sheikh Hasina said a new chapter in the continuous progress of Bangladesh Navy was opened up today through it.

“It’s a huge milestone in the history of the country’s shipbuilding industry,” she said.

She said this advancement of local shipyards has already established Bangladesh as shipbuilding nation on the world stage. “We would be able to construct more developed warships in this country in near future Insha Allah,” she said.

Later, the Prime Minister boarded the Khanjahan Ali ship and visited its different sections. Ministers, parliament members, members of the diplomatic missions, the chief of army staff, the chief of air staff and high civil and military officials were present on the occasion.

Canada's CGI to buy Logica to create global IT firm