10 soldiers killed in US air strike in Afghanistan 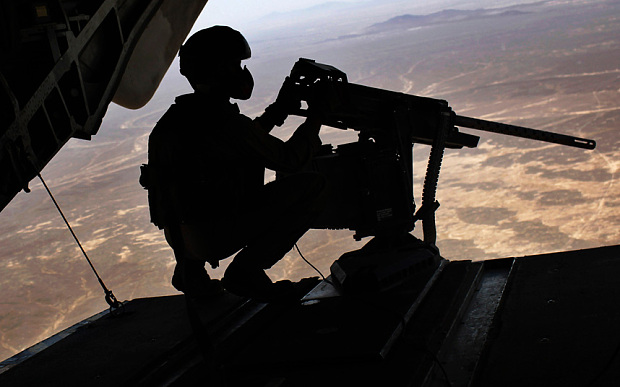 “At 6:00 am (0130 GMT) today, two US helicopters attacked a checkpoint in Baraki Barak,” district governor Mohammad Rahim Amin told AFP. “The checkpoint caught fire… and 10 Afghan army soldiers were killed,” he added, revising down his earlier toll of 14. An American military official said he was “aware of an incident involving US forces in Logar province this morning”. “This incident is under investigation,” he added. Logar’s deputy police chief, Mohammad Wara, confirmed the strike and said 10 Afghan soldiers were killed and four others were wounded.

Civilian and military deaths in coalition air strikes have been one of the most emotive and high-profile issues of the 13-year Afghan war, often provoking fury from the government. Amin said the targeted outpost was “not a suspicious area”. “The Afghan flag was waving at the checkpoint in Baraki Barak when the Americans launched their attack,” he said. NATO ended its combat mission in Afghanistan in December, leaving local forces to battle the Taliban alone, but a residual force remains for training and counter-terrorism operations. Monday’s incident comes as Taliban insurgents step up attacks on government and foreign targets during their summer offensive.

Afghan officials sat down with Taliban cadres last week in Murree, a tourist town in the hills north of Islamabad, Pakistan, for their first face- to-face talks aimed at ending the bloody insurgency. They agreed to meet again in the coming weeks, drawing international praise. While “friendly fire” incidents involving foreign coalition forces are a deeply contentious issue in Afghanistan, UN statistics show that the Taliban are responsible for most deaths. Civilians often fall victim to such attacks, with almost 1,000 Afghan civilians killed during the first four months of the year, according to the UN mission in Afghanistan. Foreign forces are themselves known to sometimes fall victim to “friendly fire” incidents.

A NATO air strike killed five US troops and an Afghan soldier in an accident during clashes with insurgents. The incident could have been avoided if American forces had communicated properly and understood their aircraft’s capabilities, military investigators later said. Afghan soldiers are also sometimes blamed for such incidents. In January, Afghan soldiers accidentally fired mortars at a wedding party that killed 17 women and children in the southern province of Helmand.

USE OF ICT IN THE PARLIAMENT

More Than 11 Million Young People Have Fled Facebook Since 2011